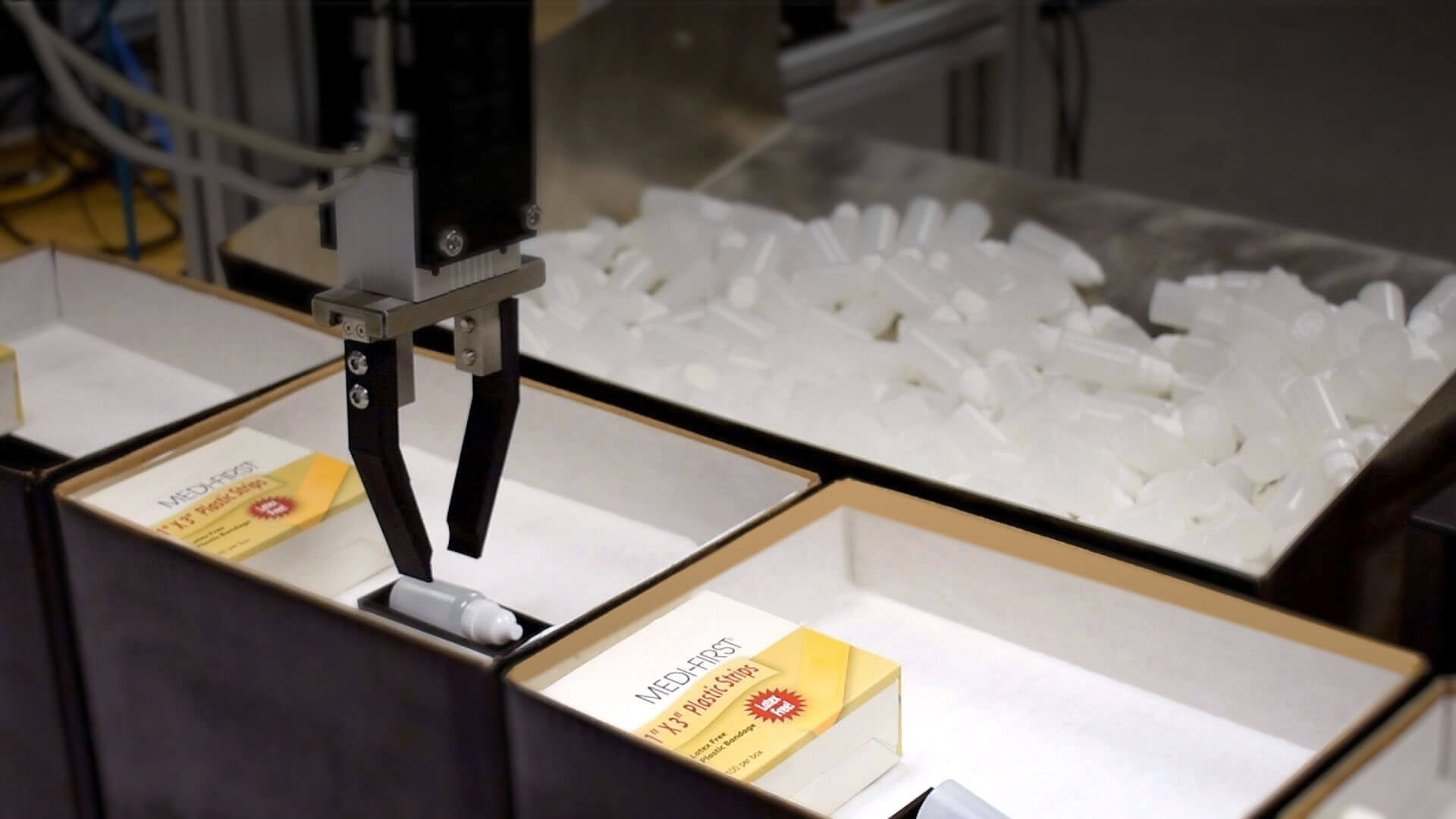 CapSen Robotics specialises in 3D machine vision and motion planning software. It equips industrial robot arms with all the spatial intelligence and control they need to handle even the most difficult of objects – with far greater accuracy and much greater speed.

Based on Glover’s Ph.D. work on 3D vision and robotic movement and the software frameworks it produced, CapSen PiC (‘pick in clutter’) resolves the classic problem of retrieving highly jumbled parts from a bin. It is used in a wide range of pick and place, machine tending and order fulfilment applications.

The beauty of the approach lies in CapSen’s proprietary machine learning models, which can be trained to recognise a new type of object with small data sets, typically comprising just a few hundred images.

In a demanding test of its innovative software philosophy, the company was tasked with demonstrating its solution in a real-case kitting application in the medical sector.

Medical product kitting presented the CapSen PiC robotic solution with two significant and competing requirements. On the one hand, it demanded very high-resolution image capture and processing, while on the other it also needed to ensure ultra-fast cycle times.

Mark Stevens, Director of Business Development at CapSen Robotics explained, “The sheer number of different medical products that could be picked from a bin and placed within a carton is truly vast, anything from pipettes, syringes and swabs to medicines in packets, tubes or bottles.” 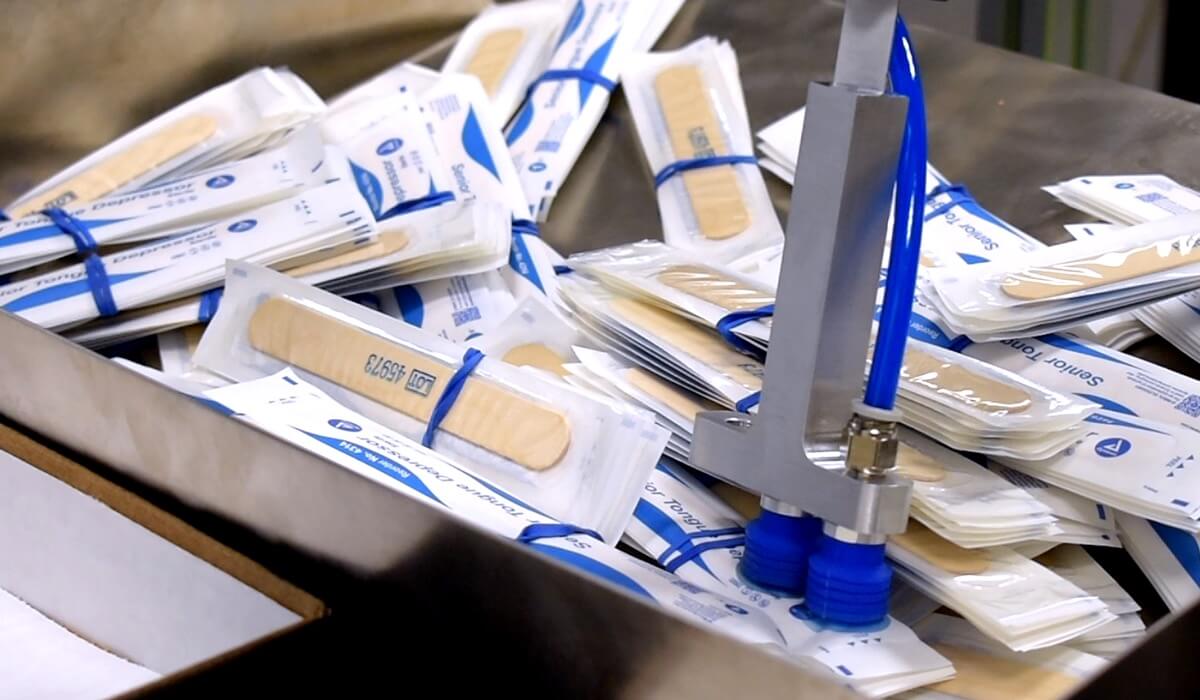 “Not only are they all relatively small in physical size, and vary significantly in shape, but they are also made from an array of different materials. Some can be shiny or translucent, some solid, while in other cases they can be flexible and wrapped in cellophane for hygiene.”

“We realised early in the project then that we needed a 3D machine vision camera that was capable of providing us with a trueness in point cloud data that would enable us to more accurately differentiate, pick and place the widest possible range of medical products – irrespective of size, shape or material.”

At the same time, medical kitting cells need to work really fast. Many will operate on a continuous basis and product pick rates are measured in 10s of millions rather than 10s of thousands per annum. Adherence to stringent cycle times was therefore vital.

Stevens continued, “Achieving sub five second pick-and-place cycle times, consistently, and for any kind of medical product, was an initial benchmark target. This though was always going to be a function of a number of different inter-related factors.”

“While we were more than confident in our software’s ability to help optimise the system’s overall cycle time, we were still reliant on the quality and speed of the camera’s image capturing and the speed of operation of the robot arm and end effector. Both aspects needed careful consideration.”

“The Zivid Two 3D camera provides our CapSen PiC vision and motion planning software with both the image resolution and the image capture time it needs to achieve the fast, ultra-fine manipulation that’s demanded in the most difficult of piece-picking applications. There really is no compromise between the two aspects, the camera’s image trueness is staggering.” 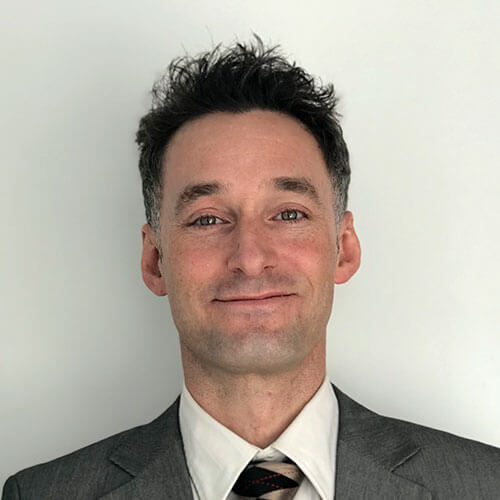 With its in-depth knowledge of integrating its PiC software with a variety of 3D machine vision technologies, CapSen was quick to deduce that the medical kitting application needed a camera performance that would have to surpass its previous experiences – in terms of both image quality and cycle time.

Excluding leading alternatives based on stereo vision, time-of-flight and laser triangulation principles, the company elected to use the Zivid Two camera. Capsen had already designed similar systems based on its predecessor, the Zivid One+ and first trials proved that the new cameras’ time-coded structured white light technology could deliver the resolution and speed required.

Stevens commented, “While Capsen PiC is inherently, and deliberately, camera agnostic, the synergy between software and hardware domains nevertheless needs to be right for each and every application. In this case the camera’s 3D point cloud data simply had to offer the elevated level of detail and accuracy we needed to handle a complete range of medical products.”

“At the same time, the camera’s image capture time also had to be fast enough to achieve the tremendous pick rates required by the kitting application. Even the most efficient software in the world can never compensate for an inferior image capture speed, it’s just not something you can mask or make-do with.”

The Zivid Two 3D camera provides our CapSen PiC vision and motion planning software with both the image resolution and the image capture time it needs to achieve the fast, ultra-fine manipulation that’s demanded in the most difficult of piece-picking applications. There really is no compromise between the two aspects, the camera’s image trueness is staggering.

Operating in this case at a typical working distance of around 700 mm, the camera’s field of view in horizontal and vertical planes is respectively 57º and 35º. This covers a target scene measuring 760 mm x 435 mm which is more than sufficient to accommodate a standard size tote bin.

For the platform mounted robot arm, CapSen specified the 6-axis Yaskawa MOTOMAN GP7, a compact, high-speed robot providing a reach of 0.92m and handling a payload up to 7 kg. With a tenth of a millimetre repeatability it assured the manipulation accuracy required, using either parallel fingers or vacuum end effectors. 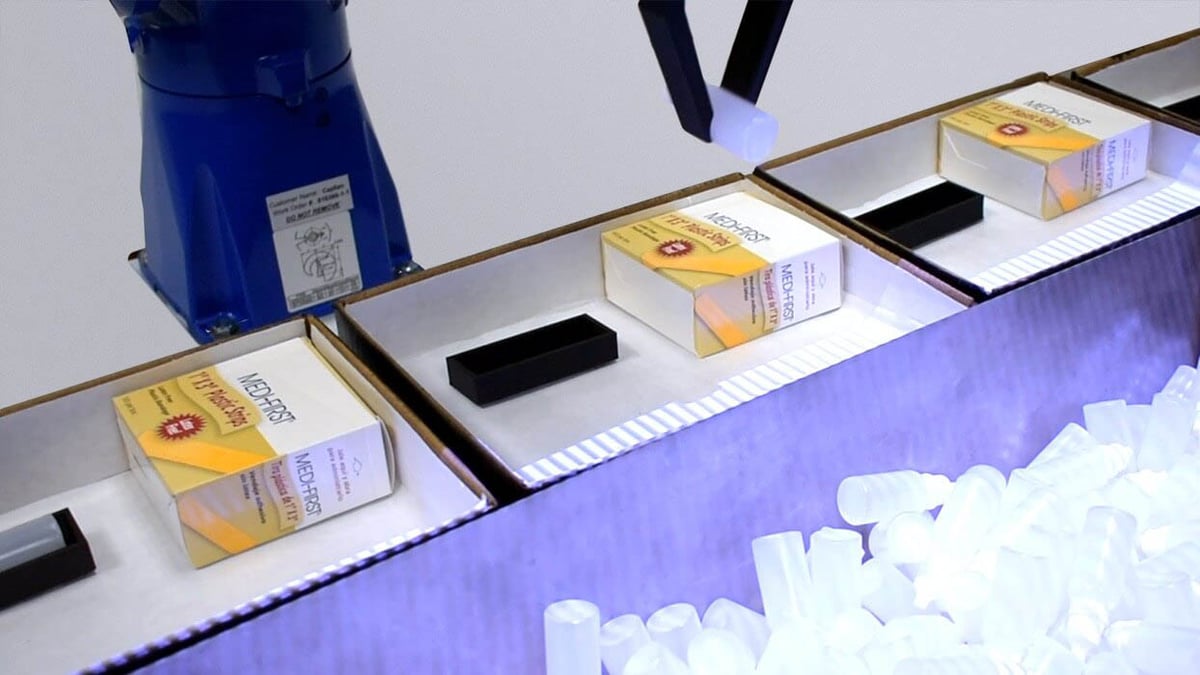 CapSen performs 10s of millions of pick and place operations of various objects per year in their 3D vision guided medical kitting application .

The combined image capture and object detection speed of the CapSen PiC and Zivid Two camera solution was proven by CapSen to be under 0.5 seconds, some 3–5 times faster than alternative 3D vision solutions for the same application.

This superior performance, combined with CapSen PiC’s methodology of processing the next image and planning the next pick path, while the robot is picking and placing the current object, ensured an average cycle time of just four seconds per pick.

Thanks to the Zivid Two camera’s artifact reduction technology, native color operation and high dynamic range, the CapSen solution is able to pick and place a wide variety of medical products, whether they be matt, glossy, semi-transparent or plastic wrapped.

In long-term proving trials, this state-of-the-art medical kitting demonstration has operated error-free 24/7, and CapSen is confident of its ability to reliably pick many millions of different medical products per year.

CapSen is now considering the adaptation of the solution to address the larger scale challenge of de-palletizing in a similar fast throughput production environment.

At a socio-economic level, the solution also addresses an issue of rising significance across a range of sectors. Where the kitting price point is low and/or the volumes are so high, finding the human resources to operate manually on a three-shift, 365 days per year basis is increasingly unlikely…

Automated kitting systems like CapSen Robotics’ provide a fast, hygienic and error-free solution with an attractively short ROI, one that enables human resources to be better deployed in less strenuous and more value-adding tasks.